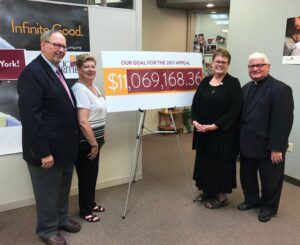 Reverend Monsignor David S. Slubecky, vicar general and moderator of the curia of the Diocese of Buffalo, announced this morning the 2017 Appeal in support of Catholic Charities of Buffalo met and exceeded its $11 million goal. After a very challenging Appeal, officials expressed gratitude for the incredible parish, community and corporate support, especially last-minute gifts, which brought the campaign total to $11,069,168.36.

During the announcement, Monsignor Slubecky, representing The Most Reverend Richard J. Malone, bishop of the Diocese of Buffalo, who was out of town and unable to attend, traced the ups and downs of the journey that closed on June 30.
“Our early results looked promising, only to sink as spring turned to summer and we faced a nearly one million dollar shortfall entering the final month putting us in great jeopardy of not reaching our goal for only the third time in 93 years,” said Msgr. Slubecky.
He added, “With the community, including many of our friends in the local media, rallying on our behalf, we slowly but surely inched closer and closer to our $11 million goal as the June 30th deadline rapidly approached.” 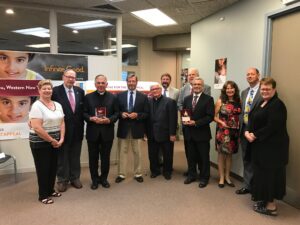 The Appeal, which officially began Jan. 18, helps fund Catholic Charities’ 70 programs and services across 61 sites in Western New York along with a number of ministries through the Bishop’s Fund for the Faith.

Sister Mary McCarrick, Catholic Charities diocesan director, said, “All of our contributors – including those who graciously gave a second time or for the first time at the last minute – understood that while our time was finite, we could do infinite good with their gifts.  We certainly will. We pledge to remain just as focused on continuing our mission to serve people in need as we were in meeting our goal.”
Sister Mary added, “It’s clear that our final pushes and pleas which brought additional gifts, such as from two long-time donors with a matching challenge, coupled with non-parish affiliated Western New Yorkers and those companies who responded with new gifts, are the reasons this Appeal ultimately succeeded and we are all especially thankful.”
Gerard and Barbara Mazurkiewicz, 2017 Appeal chairs, talked about the importance of every donation to this year’s campaign. 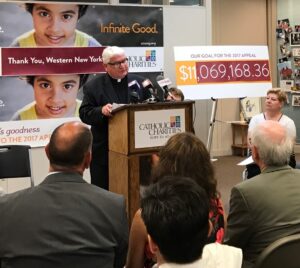 Rev. Monsignor David Slubecky, Diocese of Buffalo vicar general and moderator of the curia, thanks the Western New York community and Appeal volunteers for their efforts.

Jerry said, “Thanks to the hard work of our clergy and numerous volunteers, as well as the charity of many donors, our goal has been achieved. Many of you who helped us along the way may not have been Catholic, and some of you may not have been able to give as much as in previous years. But, no matter your faith, and no matter the amount of your contribution, your support of this Appeal will have a profound, positive impact on someone’s life. For that, we thank you.”

Barbara said, “This year’s Appeal patron saint, St. Marianne Cope, vested her faith in God to serve the sick tirelessly and compassionately. As such, we vested our faith in her to help us through the 2017 Appeal. With her intercession on our behalf, and the leadership of Bishop Malone, Sister Mary and Dennis Walczyk, our chief executive officer, we are proud to have accomplished the 2017 Catholic Charities Appeal goal.”
The Mazurkiewicz’ also thanked members of the leadership team and the parish, community and corporate divisions, and recognized the following for their outstanding contributions:
• St. Brendan on the Lake Parish in Newfane, which exceeded its 2017 goal by 27 percent for a total of $38,555, the highest percentage above goal for all parishes in the diocese contributing less than $100,000;
• St. Peter Parish in Lewiston, which exceeded its goal by 25 percent for a total of $291,780, the highest percentage above goal for all parishes contributing more than $100,000;
• St. Stephen Parish in Grand Island, which was given the Innovator Award for their consistent and faithful use of Catholic Charities’ Appeal resources which helped the team surpass its 2017 goal, achieving $176,783; and
• Dan Linenfelser, parish chair of St. Stephen Parish, was bestowed the Service in Love award for 50 years of service to the Appeal, beginning with his help as a collector to serving as chair since 1979. This was his last year as chair.
In addition, Sister Mary introduced Ciera Jones, former Catholic Charities client and current staff member, to share the story of how the organization has impacted her life.
Ciera explained that she began taking classes toward her high school equivalency in 2016 and today she works with Ladies of Charity in the Parish Outreach and Advocacy Department.
Ciera said, “Almost three years ago, my life changed in an instant with the birth of my daughter. Having not completed my education, and knowing I needed to provide a better life for us, I made the decision that I was going to earn my High School Equivalency. To this day it is one of the best decisions I have ever made, and Catholic Charities has been with me each step of the way.”
She added, “I now work with Catholic Charities taking referrals, answering phones and working in the Lots of Clothes thrift store at Ladies of Charity. The experience has been great and I enjoy what I do.”
The 2017 campaign theme was “Finite time. Infinite good.”
Catholic Charities has helped individuals and families in need since its founding in 1923. That need is varied and widespread – from emergency assistance to counseling and from specialized services for the elderly to help with job training and education. Catholic Charities empowers children, families and seniors to achieve meaningful, healthy and productive lives. In all situations, Catholic Charities delivers support to meet immediate needs, and then assess its clients for other needs to ensure long-term success.
Catholic Charities is an excellent steward of the contributions it receives. Catholic Charities receives the highest-possible rating (four stars) from Charity Navigator for transparency and sound fiscal management. Catholic Charities also receives the highest ratings from the Council on Accreditation for quality service.
For further information about the organization and its programs and services, contact Catholic Charities at (716) 218-1400 or go to ccwny.org. You can also check out Catholic Charities on Facebook at facebook.com/ccbuffalo, on Twitter at twitter.com/ccbuffalo and on Instagram at Instagram.com/catholiccharitiesbuffalo.