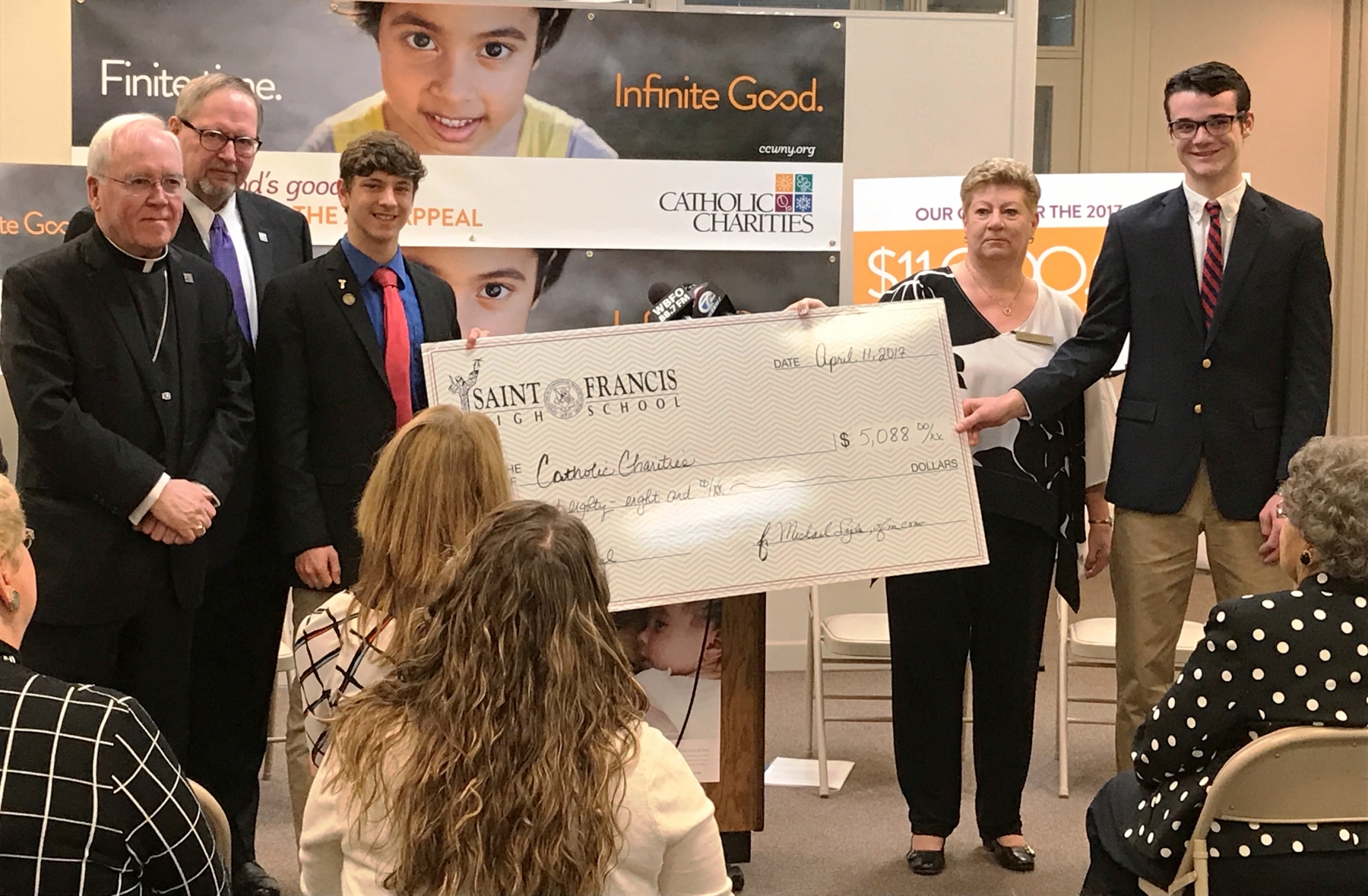 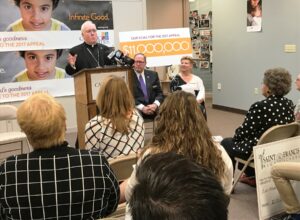 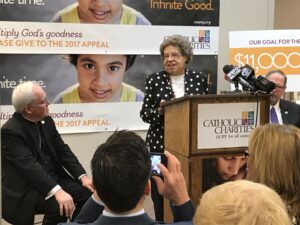 Ladies of Charity Volunteer Estelle Anderson, 95, who was named one of five finalists for the annual CCUSA Volunteer Award. 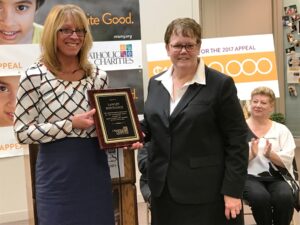 Lee Szczublewski of Lawley Insurance accepts a token of thanks for their generous support. 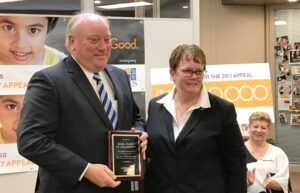 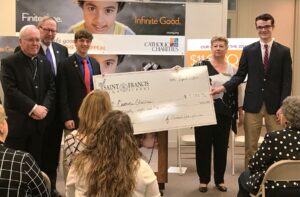 The Most Reverend Richard J. Malone, bishop of the Diocese of Buffalo, reported today on the progress of the annual Catholic Charities of Buffalo Appeal, announcing $7,890,544.24 has been raised to date, as Catholic Charities officials marked the close of Appeal Week 2017 which ran from April 2-9 in parishes throughout the diocese.

Today’s total represents 72 percent of the final goal, which is trending behind recent years when up to 80 percent of goal or more was typically reached. Funds raised for Appeal 2017 support Catholic Charities’ 70 programs and services offered across 61 sites throughout the eight-county region, and the Bishop’s Fund for the Faith, which supports related ministries of the Diocese of Buffalo.

The 93rd annual Appeal officially began Jan. 18. The theme of this year’s Appeal is “Finite Time. Infinite Good” and the patron saint is Saint Marianne Cope.

Bishop Malone thanked the hundreds of parish, corporate and community division volunteers, and pastors for helping to raise funds that will allow Catholic Charities to continue to impact the lives of more than 152,000 Western New Yorkers; Catholics and non-Catholics alike.”Because Appeal Week and Easter are later than normal on the calendar this year, we must place special emphasis now on the first half of this year’s theme – ‘Finite Time,'” said Bishop Malone. “We have fewer than 12 weeks to reach our goal by June 30th, the end of our fiscal year, in order to continue providing the ‘Infinite Good’ that makes up the second half of this year’s theme.”

Sister Mary McCarrick, OSF, diocesan director of Catholic Charities, encouraged those who have not yet donated to consider a donation in order to help the organization reach its goal.

Sister Mary said, “I would like to ask everyone – given that our services can help anyone in need in our diverse community of Western New York – to take just a moment and make a secure contribution online. A gift of any size will be appreciated, and most importantly, it will make a difference!

Gerard and Barbara Mazurkiewicz, the 2017 Appeal chair couple, asked the community to rally on behalf of those served by Catholic Charities between now and the end of the Appeal.”The progress we’ve made is good, and we sincerely thank all who have donated already. But, there is still work to be done,” said Barbara. “Time is of the essence, so we kindly ask our community members to donate. The results of your charity will live on longer than you can imagine through Catholic Charities and their wonderful work.”

Special recognition was given to Lawley Insurance for their outstanding corporate support over the past five years, including underwriting a paid radio campaign to increase awareness among corporate donors and other potential contributors during the Appeal, and to the Basil Family of Dealerships for their support of this year’s Lawley radio campaign. Kathy Best, director of community relations for Lawley Insurance, and Mike Basil, president of Mike Basil Toyota, accepted the awards on behalf of their organizations.

Daniel Janak, a senior at St. Francis High School in Athol Springs, presented a large, facsimile check in the amount of $5,088 representing the students’ contribution this year, the largest gift thus far among all schools in the diocese. The students at St. Francis conducted a competition among the homerooms for donations.Additionally, Dennis C. Walczyk, chief executive officer of Catholic Charities, introduced Estelle Anderson, announcing that Estelle has been named one of five finalists for the 2017 Catholic Charities USA Volunteer of the Year Award. Anderson, 95, has been volunteering with the Ladies of Charity, especially its Layette Program, for more than 20 years. The Ladies of Charity, a volunteer organization of women and girls affiliated with Catholic Charities of Buffalo, coordinates several programs providing clothing, household goods, school supplies and Christmas toys for children – all serving the needs of individuals and families who seek basic assistance through Catholic Charities.

Anderson is credited with building the program into the success it is today. A talented seamstress, she sews crib sheets and receiving blankets for in-need infants. Anderson also organizes baby showers for the Layette Program, during which people bring in donations of baby clothes, blankets and crib linens. “We are thrilled for Estelle and her accomplishment. This is the second time a volunteer we nominated has been named a finalist,” Walczyk said. “Not only has she sewn thousands of blankets and crib linens for the Layette Program, she also sews reusable tote bags for home-bound seniors and for our food pantry clients. Estelle truly knows how to create infinite good and to multiply God’s goodness. Catholic Charities of Buffalo is proud and honored to be able to call her our volunteer.”

Catholic Charities is the most comprehensive human service provider in the region, serving people of all ages, races, faiths and walks of life, Catholics and non-Catholics alike.