By Kate PelczynskiNovember 7, 2022News
No Comments 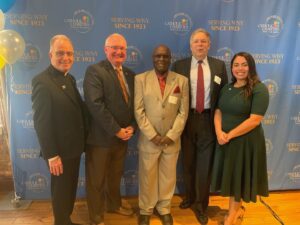 In anticipation of its 100th year of serving the Western New York community, Catholic Charities of Buffalo formally began its year-long celebration with a Centennial Kickoff Luncheon on Nov. 2, 2022 at The Pearl at the Webb in downtown Buffalo.

The organization, which was incorporated on Oct. 30, 1923, was born out of the Diocese of Buffalo from a collection of 16 institutions serving the very young to the elderly. Today Catholic Charities is a comprehensive human service organization with a dedicated mission that has provided HOPE and advocated for millions of individuals, children and families in need through the years.

At the Centennial Kickoff Luncheon, agency leaders highlighted its accomplishments and goals, along with exciting plans for the 100th anniversary year.

According to Deacon Steve Schumer, Catholic Charities president and CEO, “This IS a time to mark and to celebrate, and a time to look forward to plans for this critical work beyond this century.”

In addition to Deacon Schumer, Rev. Msgr. David LiPuma, president and chair of OLV Institutions and pastor or Our Lady of Victory National Shrine and Basilica offered an opening prayer and blessing. The more than 75 luncheon attendees also heard remarks from David Rogers, one of the founders of Life Storage, Inc. and a long-time volunteer and supporter of Catholic Charities, and Adam Sumlin, PhD, Appeal 2023 chair. 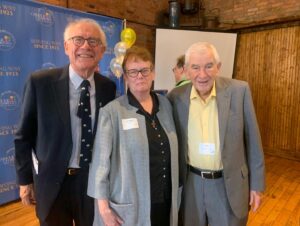 During its first year, Catholic Charities served about 12,500 people. Last year, the organization provided help and hope to more than 134,000 individuals, families, and children across the eight counties of Western New York.

Over the next year, Catholic Charities will celebrate its legacy in ways that mirror its mission, vision and values, as well as reflect on where the organization has been, where it is now, and its future direction so it can continue to be a beacon of HOPE for the next 100 years.

Keep up to date with Catholic Charities 100th anniversary year activities now through October 2023 at www.ccwny.org/centennial.