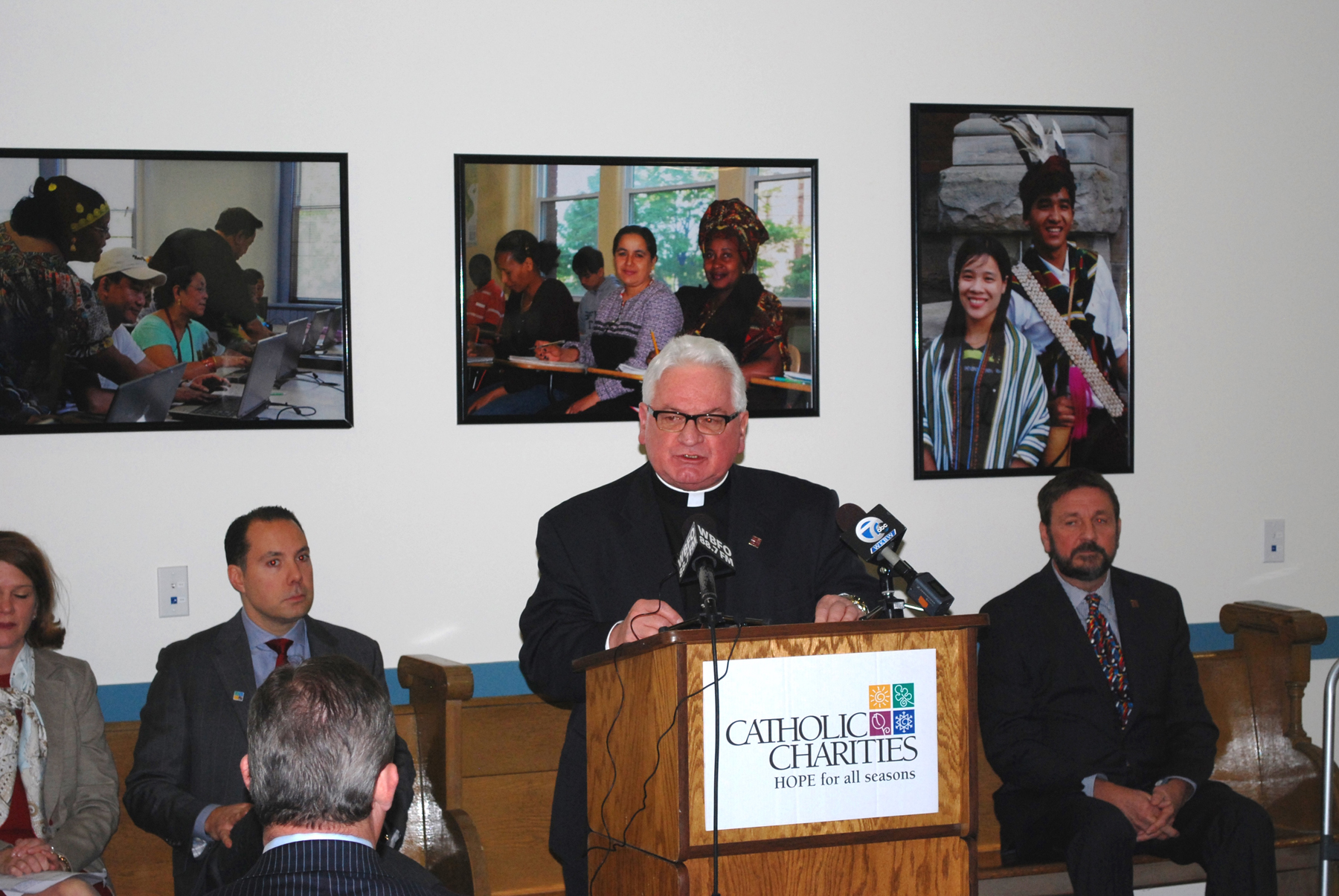 “Find Good Within” is the theme for 92nd annual Appeal and St. Nicholas is this year’s patron saint 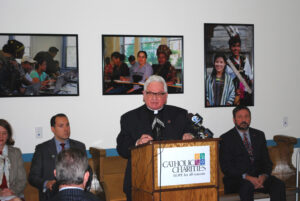 Monsignor David S. Slubecky, Vicar General and Moderator of the Curia for the Diocese of Buffalo, announces the goal and theme for the 2016 Catholic Charities Appeal during a news conference Wednesday morning.

BUFFALO, N.Y., January 6, 2016 – Catholic Charities of Buffalo officials and volunteer leaders today announced an $11 million goal for the 2016 Appeal. Monsignor David S. Slubecky, Vicar General and Moderator of the Curia for the Diocese of Buffalo, representing The Most Reverend Richard J. Malone, Bishop of Buffalo who was unable to attend, made the announcement at a kick-off event held at the new Catholic Charities Health Care Center for refugee clients and the community, located in the former Nativity Roman Catholic Church on Buffalo’s West Side. The theme for the 2016 Appeal is “Find Good Within” and the patron saint of the 92nd annual Appeal is St. Nicholas.

The Appeal helps fund Catholic Charities’ 70 programs across 61 sites in the eight counties of Western New York along with Bishop’s Fund for the Faith.

“I wish I could report the need for our services has diminished, but unfortunately that’s not the case,” said Monsignor Slubecky.” Last year alone we provided assistance to nearly 132,000 individuals, Catholics and non-Catholics alike, and we anticipate a similar or increased volume in the coming year. To continue providing vitally important care and support to all who need it, we have established an ambitious goal for Appeal 2016. This year’s theme, ‘Find Good Within,’ reminds us to open our hearts and find the good – and also the God – within each of us, in order to help those who are without, or those who are in need of a helping hand at this particular time in their life.”

Two important dates during the 2016 Appeal include First Report Sunday on March 13 and the culmination of Appeal Week on Palm Sunday, March 20. Although Appeal Week marks the strongest push for parish donations, volunteers will work to achieve the final goal by the conclusion of the organization’s fiscal year on June 30.

The location for the Appeal kickoff offered a sneak preview of the just completed reconstruction of the church sanctuary, retaining much of the space’s architecture, into a primary care health clinic. The facility will be operated by Mobile Primary, with dental services provided by Baker Victory Dental Services, along with offices for Catholic Charities’ Immigration and Refugee Assistance case managers and a community meeting room. In addition, D’Youville College students will assist in the provision of clinic services.

Dennis Walczyk, chief executive officer of Catholic Charities, said, “The completion of the Health Care Center is the realization of a dream, and the final piece in the development of a comprehensive, one-stop service center for refugees settling in Buffalo. In collaboration with our service partners – Mobile Primary Care, Baker Victory Dental Services and D’Youville College – we expect to serve more than 800 people at this site during 2016. It also represents another example of the creative re-use by Catholic Charities of a former church building as a service center, striking and creative in its design and energy efficient. We laud our development partners, McGuire Development, architects Lauer-Manguso Associates and R&P Oak Hill Construction.”

Sister Mary McCarrick, OSF, diocesan director of Catholic Charities, said, “The many new projects and all of the construction in Buffalo are positive developments, but poverty is still very real for thousands of people in the city and across our region. Alarmingly, nearly half of all children in Buffalo live below the federal poverty line, according to the most recent U.S. Census Bureau statistics, and an estimated 20 percent of children throughout the eight counties of Western New York live in poverty. People are suffering and our help remains critically important.”

Sister Mary added, “Catholic Charities is there for children, individuals and families in need. Such services include a program that not only re-houses families, but also works with them to establish a budget and uncover other solutions that will eventually result in permanent stability. One of our former clients, Rodtrice, and her children experienced this program. She was homeless when she came to Catholic Charities Central Intake and she now has a place to live, she’s working, going to school, financially stable and providing for her children.”

Stressing the importance of donations to the Appeal, Monsignor Slubecky spoke about the example set by this year’s patron saint.

“St. Nicholas was a fourth century bishop born in an ancient Greek town off the coast of Turkey,” Monsignor Slubecky explained. “His wealthy parents died in an epidemic while Nicholas was young. Taking to heart the words of Jesus in Luke 18:22 to ‘sell all that you have and distribute it to the poor,’ Nicholas used his inheritance to assist the needy, the sick and the suffering. He became known throughout the land for his generosity and concern for others. His reputation for gift-giving became the model for Santa Claus.

Nicole Tzetzo added, “A gift to Catholic Charities is a gift to our own neighbors, members of our human family seeking a hand up. As Monsignor Slubecky mentioned, St. Nicholas used his inheritance to assist the needy, the sick and the suffering. As we move through this year’s campaign with this in mind, take notice that our neighbors need us in whatever capacity we can give. Give what you can. It will come back to you in so many ways.”

Since its founding in 1923, Catholic Charities has helped individuals and families in need. That need is varied and widespread – from emergency assistance to counseling and from specialized services for the elderly to help with job training and education.