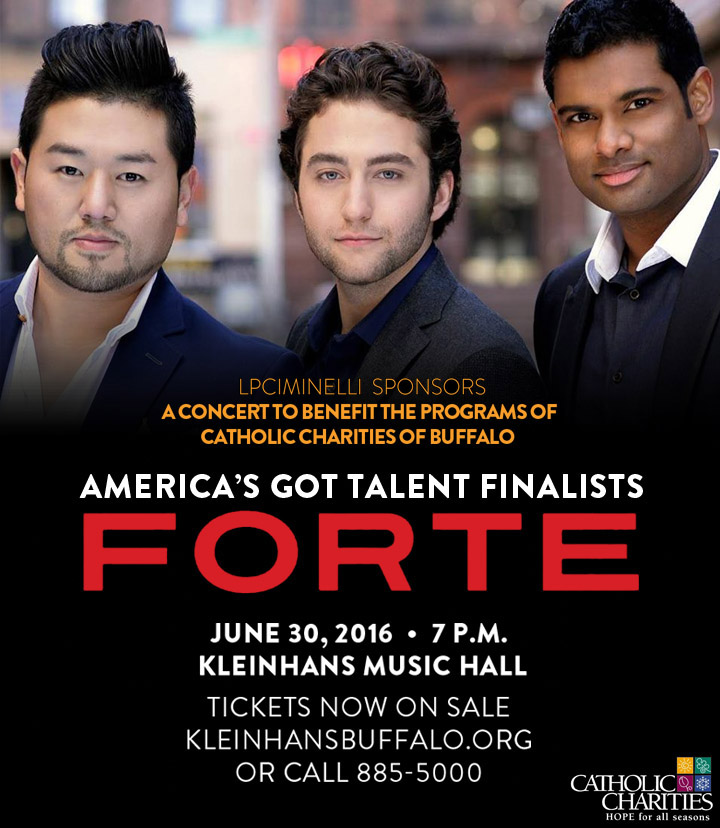 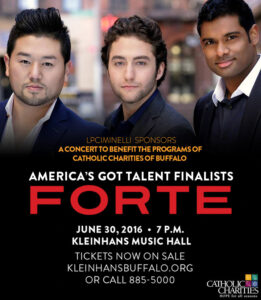 The Most Reverend Richard J. Malone, bishop of the Diocese of Buffalo, will announce the final results of the 2016 Appeal during the show’s intermission.  The annual campaign carries a goal of $11 million.

Tickets to the concert can now be purchased here through Kleinhans Music Hall and range in price from $45.50 to $75.50. A limited number of VIP meet and greet tickets are available at $115.50 each, which will include premium seating, an autographed CD and a photo taken with the trio to be provided after the concert.

“This is the first time in the history of the Appeal that Catholic Charities has ever done something like this to generate awareness and raise funds for the Appeal. We’re excited to involve the general public on a larger scale and are very much looking forward to this special evening with Forte Tenors,” said Sister Mary McCarrick, OSF, diocesan director of Catholic Charities.

Forte is best known for achieving fourth place in 2013 during the eighth season of America’s Got Talent. The group, now comprised of Josh Page, Sean Panikkar and Hana Ryu, was then signed by Columbia/SYCO records. Forte’s 2013 self-titled debut album topped the Barnes and Noble bestseller list and rose to number two on Amazon Best Sellers. The group’s second in-studio album, The Future Classics, is in the works and is expected to release this spring.

The Appeal, which officially began Jan. 6, helps fund Catholic Charities’ 70 myriad programs and services across 61 sites in Western New York along with a number of ministries through the Bishop’s Fund for the Faith.

The theme for the 2016 Appeal is “Find Good Within” and the patron saint of the 92nd annual Appeal is St. Nicholas.

As the most comprehensive human service provider in Western New York, Catholic Charities makes a difference for people of every faith and ethnicity. Since its founding in 1923, Catholic Charities has helped individuals and families in need. That need is varied and widespread – from emergency assistance to counseling and from specialized services for the elderly to help with job training and education.