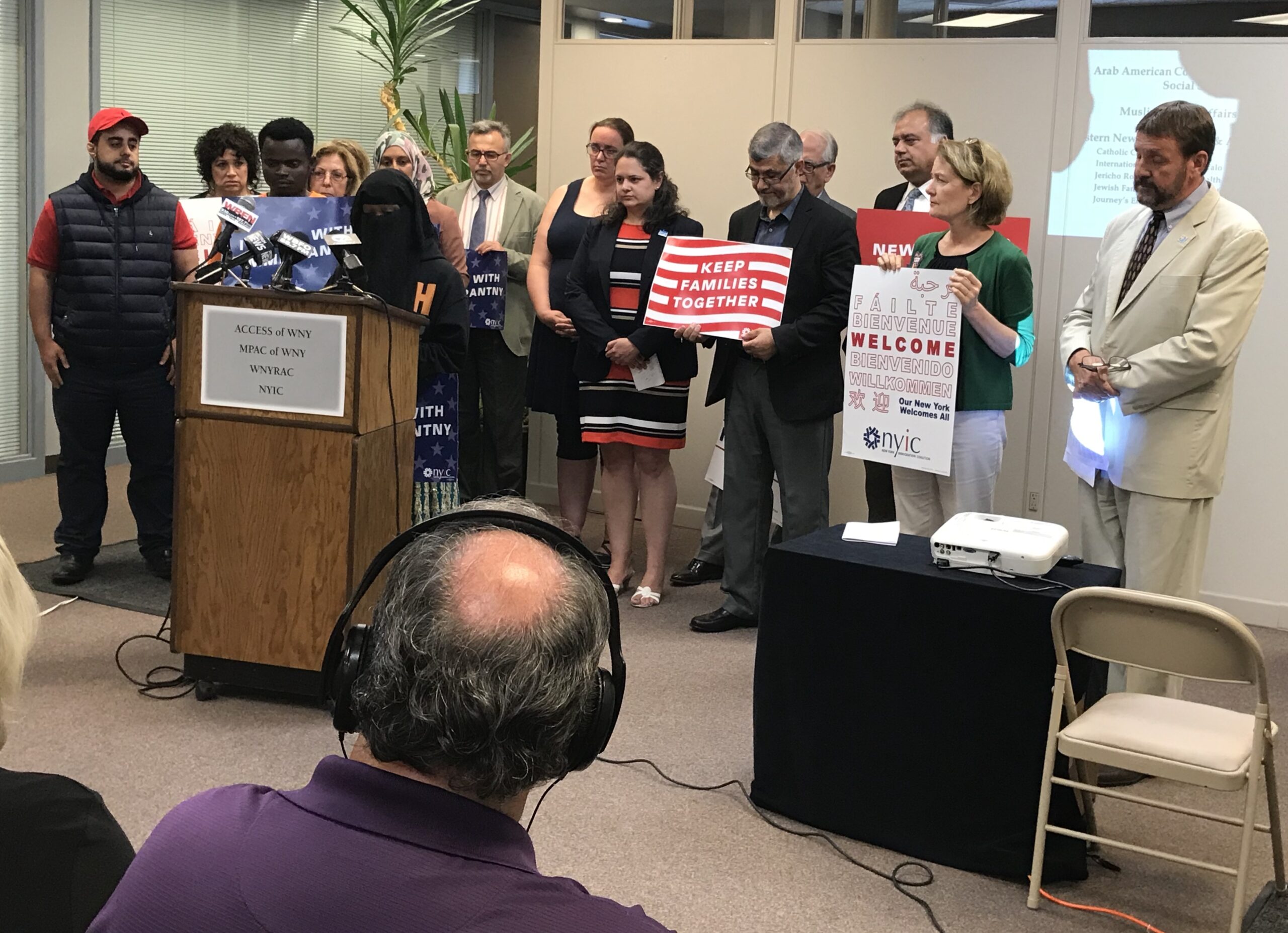 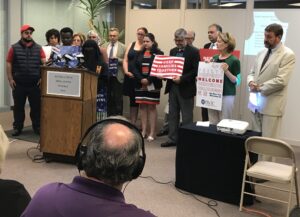 “Together we can make a difference,” said Kawiye Jumale, community leader with People United for Sustainable Housing (PUSH) during the press conference Thursday.

Local immigration, resettlement and community organizations, joined together today to speak out against current United States policies and actions impacting the lives of individuals seeking asylum and safety in this country. Among the decisions roundly condemned was Tuesday’s Supreme Court ruling upholding President Trump’s September travel ban for individuals from several Muslim-majority countries.

This ruling has devastating effects for the community in Western New York.  The Yemeni community in particular had hopes of being able to reunite with their loved ones who have been suffering from war, starvation, famine, political corruption and displacement. The ban violates U.S. citizens’ constitutional rights of life, liberty and pursuit of happiness by not allowing to have their families unified freely.

In his decision, Chief Justice John Roberts refused to pass judgment on the soundness of the Muslim ban or the lawfulness of the President’s past statements against Islam. Instead, Chief Justice Roberts held that the justifications for the ban were a proper exercise of the President’s foreign policy authority. Hawaii was therefore unlikely to win its case at the lower court, making an injunction inappropriate at this time.

Trump’s third iteration of the Muslim ban– which seriously limited travel and emigration from Muslim-majority countries Chad, Iran, Libya, Somalia, Syria, and Yemen, as well as North Korea and some Venezuelan government officials– was issued on Sept. 24, 2017 and supposed to take effect Oct. 18, 2017. However, two federal judges issued temporary halts to the ban (preliminary injunctions), with the second judge issuing a
91-page ruling calling the ban an “inextricable re-animation of the twice-enjoined Muslim ban.”

In December 2017, the U.S. Supreme Court issued a preliminary injunction that allowed full enforcement of Trump’s ban on travel from eight nations, six of which are Muslim-majority, while legal challenges proceed through the lower courts.

The bans against Venezuela and North Korea are not part of the challenge before the Supreme Court, and the administration removed Chad from the list on April 10, 2018.
The state of Hawaii argued that Trump’s executive order exceeds his executive constitutional powers, illegally discriminates based on nationality, and violates religious freedom laws by specifically targeting Muslims — an argument based on Trump’s statements about a “Muslim ban.” The administration claimed the president has broad powers over immigration policy and that the revised ban is appropriate given his constitutional authority on national security, not religion.

Muna Munassar, Arab American Community Center for Economic and Social Services of WNY (ACCESS) of WNY Co-Founder and Acting Director
“We are all very disheartened by the June 26th United States Supreme Court decision upholding President Trump’s  Muslim Ban. We respectfully disagree with the decision due to the effects it has on the population of Muslim people from the countries that have been suffering from war, starvation, famine, political corruption, and displacement. The ban violates American Citizen’s constitutional rights of life, liberty, and pursuit of happiness by not allowing to have their families unified freely.  These families are scattered throughout four continents hoping to be united with their loved ones.  We urge the United States Congress to put aside their political differences and fairly revise the immigration system so that individuals who are eligible to immigrate can do so with the same rights and respect as all other immigrants internationally.”

Dr. Khalid J. Qazi, Muslim Public Affairs Council of WNY Founding President and Senior Adviser
“The abhorrent decision of the Supreme Court on June 26, 2018 that rubber-stamps Trump Administration’s Muslim ban will take its place of infamy like the 1944 Korematsu v. U.S.  that interned Japanese Americans.  History will judge this Court harshly and its decision to endorse discrimination against a religious community – Muslims – as a travesty of justice. Justice Sonia Sotomayor rightly pointed out in a dissent that “a reasonable observer would conclude that the Proclamation was motivated by anti-Muslim animus” and that “ignoring the facts, misconstruing our legal precedent, and turning a blind eye to the pain and suffering the Proclamation inflicts upon countless families and individuals, many of whom are United States citizens.”

Dennis C. Walczyk, Catholic Charities of Buffalo Chief Executive Officer
“The Supreme Court ruling upholding the travel ban is inconsistent with Catholic teachings and seeks to divide us by race rather than to unite us by our common faith and morality.  Restricting access to the United States for those seeking a better life for themselves and their children is wrong regardless of the means used to realize it.  Whether through an Executive Order upheld by the Supreme Court that restricts travel from mostly Muslim countries or a policy that separates families and detains them indefinitely at the border; wrong is wrong.  Anything other than a condemnation of these policies is an affront to our common human decency and our Catholic faith.”

Eva Hassett, International Institute of Buffalo Executive Director
“This court decision does not make us safer. Muslims are our friends, our families, our neighbors and co-workers.  They are part of our communities and contribute to our lives.  America, and its constitution, stands for religious freedom for all. Everyone is afforded freedom of religion. Everyone means everyone. No exceptions.”

Dr. Myron Glick, Jericho Road Community Health Center Founder and CEO
“At the heart of the mission of Jericho Road is our desire to demonstrate the love of Jesus by loving our neighbor here in Buffalo and our neighbors from around the world who have come to Buffalo as refugees fleeing unspeakable violence and oppression. For over 21 years we have built relationships with courageous people who have become our friends and colleagues, and they have challenged us to see the world differently.

“It is heartbreaking to learn of the Supreme Court’s decision to uphold the President’s travel ban against people coming to this country from the countries of Syria, Iran, Yemen, Somalia, Libya, North Korea, and Venezuela. This ban wrongly discriminates against our neighbors who are Muslim, goes against the teachings of Jesus, and will not do anything to help keep this country safe. Leaving this ban in place means that many families will remain separated and America will lose its moral standing in the world. It is truly disappointing.”

Marlene Schillinger, Jewish Family Services of Buffalo and Erie County President and Chief Executive Officer
“Tuesday’s Supreme Court ruling, coupled with the recent administrative policy separating parents and children at the U.S. border, sets a critically dangerous precedent for all who value the sovereignty of humanity.  It hits home especially hard on our agency, which was founded by and initially to respond to the social service needs of Jewish immigrants in Buffalo. As Jews, we know all too well from history that such broad and blatant discrimination can have no well-meaning end.

“The commitment of this agency to ensuring a lifeline of dignity and respect to all seeking refuge from state-sponsored, ethnic and religious persecution and marginalization cannot and will not be deterred by this disappointing ruling. JFS calls on all who embrace the core of human rights on which this country was founded to stand together, to raise their voice and vote as one against today’s official endorsement of racism and xenophobia.”

Karen M. Andolina Scott, Journey’s End Refugee Services, Inc. Executive Director
“The Muslim Ban is nothing more than a reversion to the old immigrant quota system where people where denied entry on the basis of their race, religion and nationality. We thought that had been relegated to the dustbin of our history, but we were wrong. We stand in solidarity with our Muslim neighbors, colleagues and friends, and vow to make sure this country stays a welcoming place for them and their families.”

Steven Choi, New York Immigration Coalition Executive Director
“Tuesday’s Supreme Court ruling enshrines bigotry into policy under the pretext of national security, and represents a blow to the very values this country was built on. America will not be greater or safer by turning our backs on our Muslim neighbors, friends, and family. We will continue to march in the streets, and fight back in the courts to protect the people who truly make America great.

Established in 2005, Arab American Community Center for Economic and Social Services of WNY (ACCESS) of WNY is a non-profit organization that was created to promote understanding and the bonds of faith and friendship between members of the Arab American community and people of other nationalities and cultures living within America.

Based in Buffalo, New York, the Muslim Public Affairs Council-Western New York (MPAC-WNY) is aligned with MPAC’s national initiative to work for the civil rights of American Muslims, for the integration of Islam into American pluralism, and for a positive, constructive relationship between American Muslims and their representatives.

WNYRAC, composed of local resettlement agencies and those that provide significant services to refugees, immigrants and asylees, works together for the benefit of the refugees and asylees they serve, and the WNY community.

The New York Immigration Coalition advocates for laws and policies to improve the lives of immigrants and all New Yorkers, particularly those that live in lower income communities.