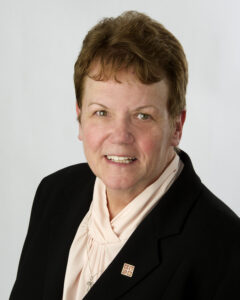 The reception is part of the Council’s two-day convening February 5-6, in which Catholic Charities personnel from throughout New York State advocate with elected and state agency officials on important issues of concern to the poor and vulnerable.

Sister Mary will receive the Bishop Francis J. Mugavero Award for outstanding contributions to the work of charity and social justice. The award is named for the late Bishop of Brooklyn.

Sister Mary began her religious life serving the poor in Colorado and Mexico. After receiving her master of social work degree from the Worden School of Social Work in San Antonio and doing post-graduate work at the University of Rochester, she joined Catholic Charities in the 1980s, serving families dealing with issues such as domestic violence and sexual abuse. She later became executive director of Benedict House, a hospice for people with HIV/AIDS.

Following a stint as the superior of her congregation, Sister Mary was appointed Diocesan Director of Catholic Charities of Buffalo by then-Bishop Edward U. Kmiec in 2009. As co-vice president of the organization and head of its annual $11 million appeal, Sister Mary strengthened the Board of Trustees, engaged in a strategic planning process, and proved a deft fundraiser. She will retire later this year.