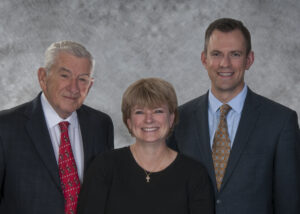 Beatrice Connelly, MD, was the first woman to chair the appeal in 1977, and Mike and Cindi Winter were the first husband-wife team in 2004.

The elder Bennett was elected the regent for the Eighth Judicial District in 1995 and was re-elected to three consecutive terms. He was elected chancellor in 2002 and re-elected to two consecutive terms. In 2009 he stepped down as chancellor, but continued to serve as a regent, with the Board of Regents unanimously appointing him chancellor emeritus, a lifetime title. In March 2015, having served for 20 years, he chose not to seek a fifth term.

Prior to his election as a regent, Bennett had a distinguished career in local government and community service, including 23 years with the United Way of Buffalo and Erie County, retiring as president and CEO in December 2000.

He has received a wide range of awards including being named “Citizen of the Year” by The Buffalo News, and serves in a number of leadership roles including chair of the Statler Foundation, a trustee of Catholic Charities of Buffalo and D’Youville College, and a member of the Buffalo diocesan planning committee and the Bishop’s Council on Education for Western New York. He is a parishioner and Eucharistic minister at St. Christopher Parish in Tonawanda.

Maurine Bennett Falkowski is vice president of Grant Builders Inc. She earned a bachelor’s degree from Notre Dame Uniersity and a master’s from the University at Buffalo, and has worked as a community organizer, caseworker and education advocate. A member of St. Benedict Parish in Eggertsville, she lives in Williamsville with her husband, Fred, and daughters Clare and Alice.

Andrew Bennett is director of business development at Kaleida Health. Following graduation from the University of North Carolina at Chapel Hill and several years as a golf professional he took on a leadership role with the First Tee of Western New York and continues to serve on the organization’s board of directors. He and his wife, Gretchen, live in Amherst, with their two children, Adelaide and Robert. They are also members of St. Benedict Parish.

Funds raised during Appeal 2018 will support Catholic Charities’ 70 programs across 61 sites in the eight countries of Western New York, along with a number of ministries through the Bishop’s Fund for the Faith. More information on Appeal 2018 will be available following the launch on Jan. 10.