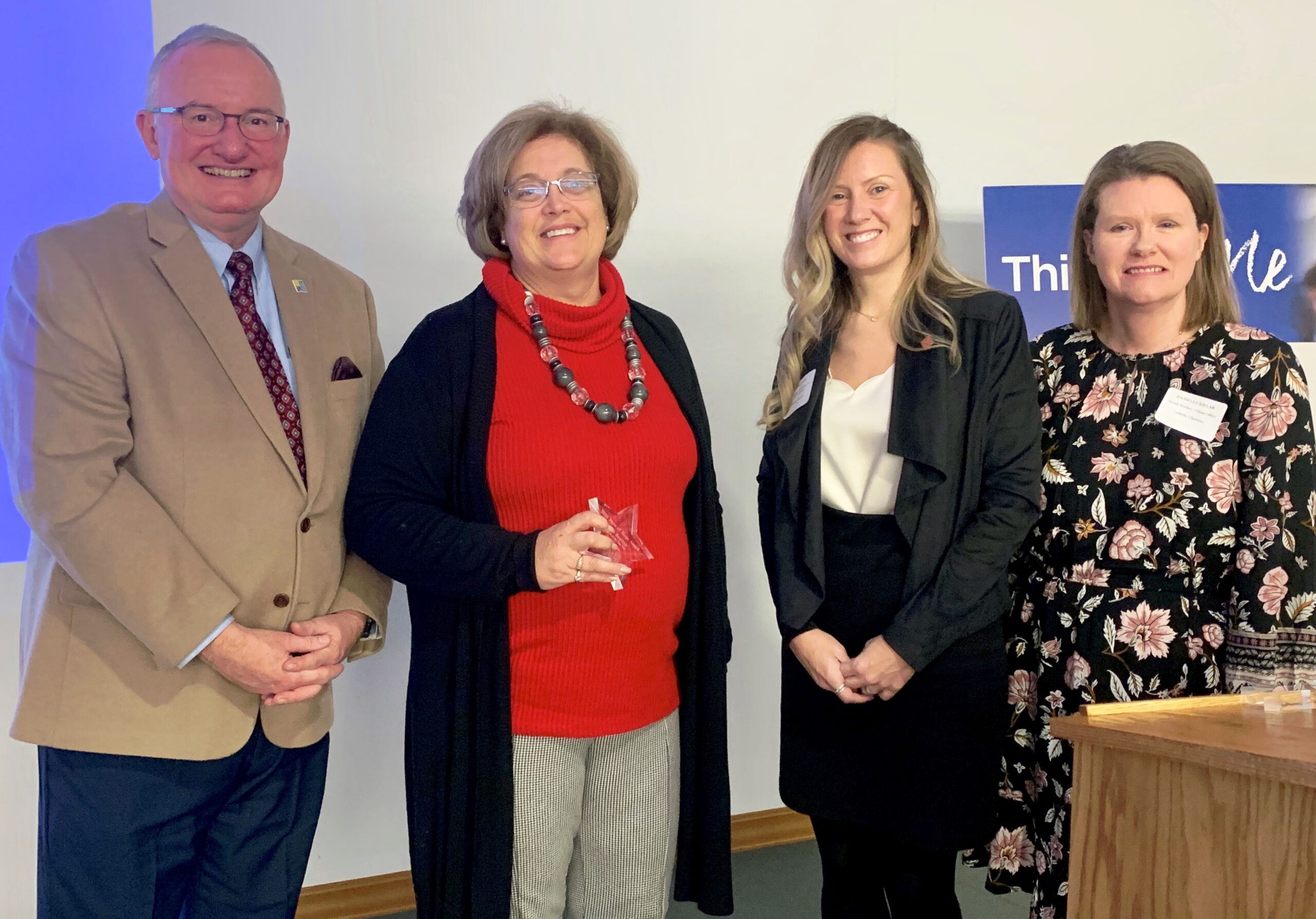 Second from left, Hero of Hope Award recipient Barb Sweitzer accepts the honor for all on the YMCA of the Twin Tiers team. With her are Deacon Steve Schumer, Anne Miles and Danielle Kielar. 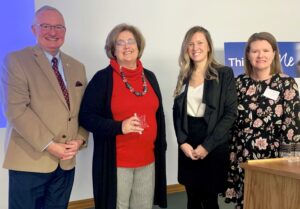 Second from left, Hero of Hope Award recipient Barb Sweitzer accepts the honor for all on the YMCA of the Twin Tiers team. With her are Deacon Steve Schumer, Anne Miles and Danielle Kielar.

The event was held at the Franciscan Sisters of Allegany St. Elizabeth Motherhouse in preparation for the 96th annual campaign, which carries a goal of $10 million. The patron saint for Appeal 2020 is Saint Joseph. Working under the theme “Think of Me,” Appeal volunteers from Allegany and Cattaraugus counties will begin reaching out to individuals and businesses in the community to encourage their support of the Appeal, which helps fund Catholic Charities’ 51 programs and services across dozens of sites in Western New York, along with a number of programs and ministries through the Fund for the Faith.

“Funding is vital not only for Catholic Charities to continue its robust mission of serving those most in need in Western New York, but for the Fund for the Faith to provide its important ministries for parishioners in our diocese,” said Rick Cronin, chair of Appeal 2020. “This marks our 96th Appeal, and we know that we couldn’t have come this far without prayers, dedicated volunteers and generous donors. As we begin our climb to $10 million, we will once again rely on this combination, and will remain committed to ensuring that Catholic Charities is a beacon of hope for those in need in Allegany and Cattaraugus counties.”

During Saturday’s workshop, a video message from the Most Reverend Edward Scharfenberger, Apostolic Administrator of the Diocese of Buffalo, was shared expressing his thanks and admiration for all that the Appeal volunteers are doing to make this year’s campaign a success. 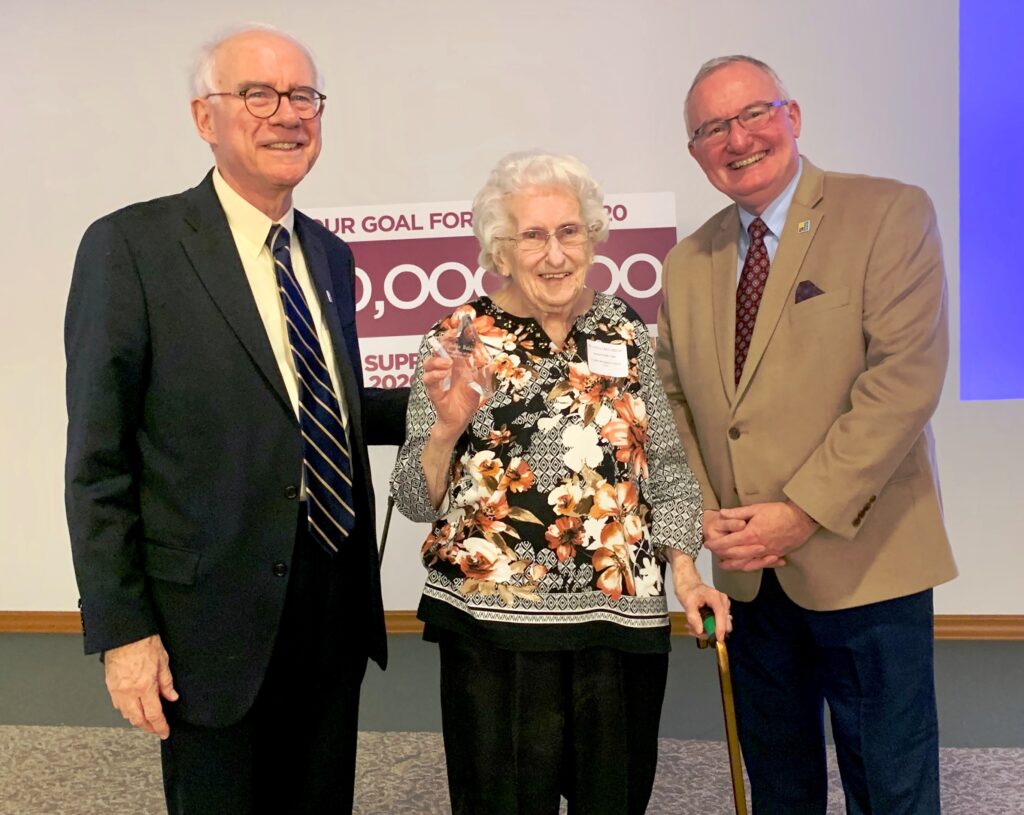 Long-time Appeal parish volunteer Stella Balcerzak was surprised with a special Volunteer Award. With her are Rick Cronin and Deacon Steve.

A Hero of Hope Partner Award was presented to Barb Sweitzer, CEO, YMCA of the Twin Tiers, and Stella Balcerzak, parish chair at St. John the Baptist Church, received a Volunteer Award. Ms. Sweitzer was selected for her collaboration efforts with Catholic Charities’ Kinship Caregivers Program, and Mrs. Balcerzak for her longtime dedication to the Appeal.

“Barb began seeking community grants for Kinship Caregivers, and when she realized that Catholic Charities was already doing the work, she proposed a collaboration,” said Anne Miles, Allegany and Cattaraugus counties district director, Catholic Charities. “She discussed that we could join our efforts, utilize the YMCA facilities, staff, resources, and provide YMCA memberships for relative and nonrelative caregiver families. The collaboration has been going strong since September and we have seen our groups double in size.”

Mrs. Balcerzak, now in her 26th year of leading the Appeal at St. John the Baptist Church in West Valley, started helping with the Appeal when she was in her 60s after retiring from a career with Trico and Curtiss Wright. From the time she joined the parish Appeal team until today, Mrs. Balcerzak – now in her 90s – drives from farm to farm and to parishioners’ homes collecting donations.

“Stella is the embodiment of Catholic Charities’ mission. She is dedicated, compassionate, and always thinking of and caring for her neighbors in West Valley,” said Rick Cronin, who presented the award. “She is everything we envision as a steward of the Appeal, and we are so honored to have her on our team of volunteers.”

In addition, clients Sherry and Maggie Bishop shared how the Catholic Charities’ Kinship Caregiver Program has supported their family over the past seven years.

Catholic Charities provides a wide range of services in both Allegany and Cattaraugus counties. These services include: basic assistance; food pantries in Wellsville and Franklinville and a thrift store in Wellsville; counseling for individuals, couples and families; a number of support groups; Domestic Violence Offenders program; Our Kids: Parent Education and Awareness Program; Kinship Caregivers program; Intensive Case Management; and New Hope Partners program. The Allegany County office is located at 67 E. Pearl St., Wellsville, and offices in Cattaraugus County are located at 2636 W. State St., Suite 301, Olean, and at 28 Park Square, Franklinville.

The Fund for the Faith has supported the spiritual needs of WNY Catholics since 1937 through Campus Ministry, Hospital and Nursing Home Ministry, Deaf Ministry, and Youth and Young Adult Ministry, among a number of other ministries.

Appeal Sunday will take place April 5 throughout the eight counties of Western New York to celebrate the support of those who have made contributions to the Appeal, and to encourage those who have not already donated to do so. Volunteers will continue to work to achieve the $10 million goal until the conclusion of Appeal 2020 on June 30.