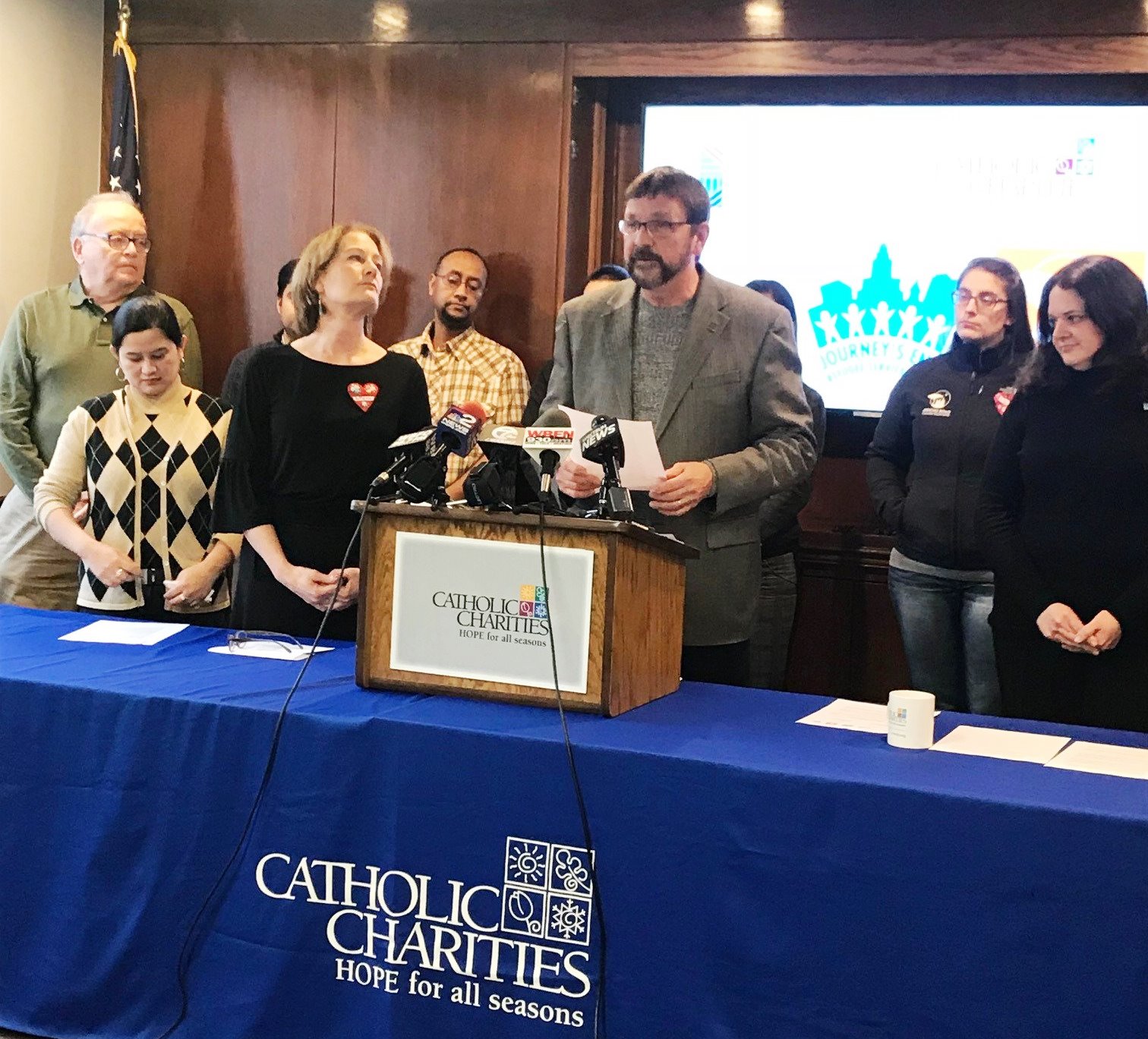 Fri, Jan 12th 2018 02:00 pm
Dennis Walczyk, Catholic Charities CEO, offers his organization’s reaction as one of the statements presented by the members of the WNYRAC. 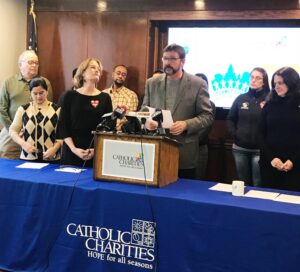 Dennis Walczyk, Catholic Charities CEO, offers his organization’s reaction as one of the statements presented by the members of the WNYRAC.

Organizations involved in the Western New York Refugee and Asylee Consortium, which represents five agencies that resettle and provide services to refugees, immigrants and asylees in the Buffalo area, joined together today to respond to recent comments attributed to President Trump. The comments seen as inappropriate were allegedly made during meetings this week on immigration policies with lawmakers.

Representatives of the local groups shared their comments:

“Welcoming those who seek liberty, justice, freedom and safety is core to the idea of America.  Just like the founding fathers, and most of our ancestors, immigrants come to America to make new lives in a country where there is opportunity and all are equal, no matter what their race, religion, age, ethnic group or gender identification.

“The International Institute has lived these values for 100 years, welcoming and supporting immigrants from all over the world who drive economic growth and have made WNY the amazing place it is. Diversity and multiculturalism are strengths and improve all of our lives. Without immigrants, our population would decline faster, workforce issues would be more difficult, neighborhoods would be emptier, and our lives less rich.

“We at the International Institute of Buffalo disagree strongly with the implications of the President’s words. We believe every person from every country has value and contributes to the community.  We welcome our immigrant and refugee neighbors, value their presence highly and stand with them as they continue to change our region for the better.”

“Since our beginning in 1923, Catholic Charities of Buffalo has been welcoming the stranger in whatever form that might take, from an orphaned child to a single mother to a refugee or immigrant. Treating all persons, whether native to our country or not, with dignity and respect is imperative to who we are as an organization. Thus, we are deeply disappointed by remarks attributed to President Trump that were said during a meeting on Immigration Policies, and we are discouraged that he fails to see the value and goodness of those who come from these countries and beyond.

“Here in Buffalo, we realize how much immigrants and refugees contribute to the vibrancy and growth of our community, and we want them to know we continue to stand by them as neighbors, friends and supporters.”

“The Jewish Family Service (JFS) mission to provide a lifeline of new hope for refugee individuals and families from Syria, Iraq, Sudan and other strife-torn nations cannot be deterred by the callous inhumanity of President Trump’s remarks yesterday. Such rhetoric demeans all Citizens.

“JFS stands in firm solidarity with HIAS and the many other organizations and agencies (International Institute of Buffalo, Catholic Charities, Journey’s End Refugee Services, Jericho Road Community Health Center) here in Erie County and across the nation preparing to fight against policies that jeopardize freedom, justice and safety for the innocents of the world.

“We must raise our voices collectively as one, in a message of protest to President Trump so loud and profound that cannot be ignored.  We cannot do it alone… together we will succeed. Such damaging and destructive remarks jeopardize each and every one of us, and cannot stand.”

“While we obviously condemn in the strongest possible terms the bigoted and ignorant language used by President Trump to describe immigration that does not conform to his racialized ideal of who should and should not be allowed to become part of the fabric of our democracy, his words only inspire us to work that much harder to ensure that Buffalo remains a welcoming place for refugees and immigrants, regardless of their race, nationality, ethnicity or creed.

“The President should know that, contrary to what his advisors tell him and what he thinks his base wants, in Buffalo refugees and immigrants are welcome, wanted, and appreciated by people of all political persuasions. Our refugee and larger immigrant community has made us a more engaged, empathetic, and informed public about not only the challenges faced by those fleeing persecution and deprivation, but their strength, resilience, and eagerness to embrace the American Dream. In our City of Good Neighbors, they are not some faceless, menacing, one-dimensional group that they are too often portrayed in the media and the occupants of the White House. Here we embrace them as human beings who want the same things for themselves and their children that we all do, and deserve the dignity and respect that we all expect for ourselves.

“We will leave President Trump with this story shared with us last night on social media by Erin Maynard, just one of tens of thousands of people in WNY who support our refugee and immigrant population, because this is our reality and our experience, and we encourage the President and his base to leave their comfort zone and share it with us:  ‘I got a chance to meet some of your clients on the metro one day. They were some of the nicest, most sincere, eager-to-learn people I have EVER met. They were telling me that they were on a ‘field trip’ to learn about the city’s transportation system, and asked me all about myself. Given how long they had been here, their English was amazing. And it was humbling to realize that there was little chance that I would have learned their language as well, had I been plopped in their country under the same dire circumstances they faced.’ ”

“Immigrants from many countries in Africa are part of the fabric of our community here in Buffalo and at Jericho Road. They are our friends, neighbors and patients. They are contributing to the revitalization of Buffalo. And Jericho Road is following some of these friends home to help them start medical clinics in Sierra Leone and Congo.

“We would invite the President to visit the work of Jericho Road here in Buffalo and in Sierra Leone and in Congo and meet the amazingly resourceful people who we now consider our friends and who are created in the very image of God and share the same joys, sorrows and aspirations of each of us.

“We encourage the President to speak words that bring all of us together instead of speaking words that divide. America is better because of our diversity of peoples and cultures.”

WNYRAC, comprised of local resettlement agencies and those that provide significant services to refugees, immigrants and asylees, works together for the benefit of the refugees and asylees they serve, and the WNY community.